Assuredly, Samsung decided to shake the market of mirror-less SLR (how can we name these cameras?) since the official launch of the Samsung NX-10. 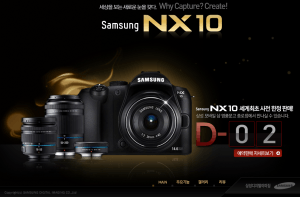 They open a new Korean web site at http://www.samsungimaging.co.kr/ which is -for now- dedicated to the NX-10 but which will certainly be the spearhead of the 2010-2011 marketing efforts around the new NX series. It should support Samsung’s strike to become a major actor of the mid-range SLR cameras (what could not be achieved even in the partnership with Pentax).

But they also announce us relatively bad news: The NX10 will not be available on camera shop shelves before March 2010 (in the US and in Europe). We will all have to be patient waiting to the opportunity to get access to this camera which intend to shake up too-well-established categories of the SLR market.

← Inform us, but leave no trace
ISO is the new MP →