Canon just sent an invitation for a revolutionary event to their best press contacts in the US. 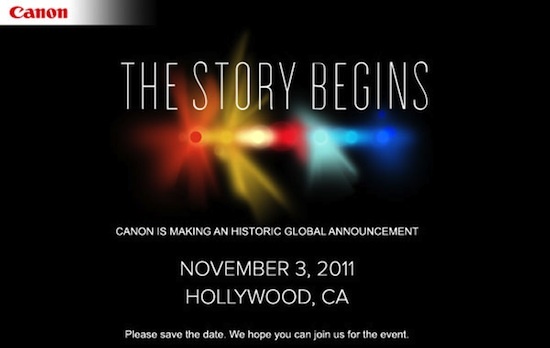 The only problem: Nobody really knows what it’s about. And since the Canon-lovers actually have nothing to talk about at the time (Canon and Nikon had made it clear that it was not even worth inviting them to the Photokina if it was in September this year), the Internet is idly buzzing around.

Nothing filtered out, but since the event will be held in Hollywood and Canon has some trouble on the pro video market, November will probably not see any new DSLR from Canon…

It somehow funny to see how some people I won’t name (they will easily recognize themselves) keep stirring the pot of rumours for Nikon and Canon while they know perfectly well that they have no solid rumor to bring to the table since there is no announcement in the short term. For the time being those two brands are still fighting to put the existing productions back to the pre-Japan-earthquake levels rather than concentrating on new announcements.

← Sony NEX-5N: Clicks in the video
Extreme photo: Lift-off from the sky →