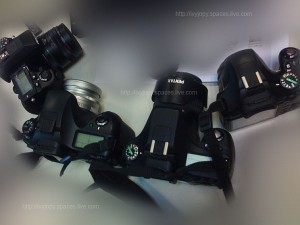 New Pentax on the left

Things are getting more and more difficult to understand in the rumour coming from Shanghai about the possible new Pentax SLR. After a first blurry image, we now get a photo which shows a group of Pentax SLR photo cameras and the one on the left cannot be identified as one of the existing products.

One would start thinking that there is somebody with a good information available and actively leaking information. In short, something like “The new Pentax will have…

From what was voluntarily leaked before by Samsung, Hoya and Pentax people, we can also assume that it will contain anything trendy like video capture, HDMI output, etc.

Now, there is something definitely weird. To me, this source of information seems too organized, too clean (despite the blurry look of the first image), to be an accidental leak. It smells a lot like viral marketing, or marketing exploiting the powers of the Internet to distribute whatever information the manufacturer wants us to know and understand.

I’d say that whatever is taken as fact from the photos is probably true, but any extrapolation or approximation must be forgotten. And, in the end, all this amounts to what has been made available by Pentax (and friends) already: A new smaller body, but no Full Frame in 2009.

I’m afraid we will have to wait.