The Nikon D300s is semi-official

It’s on an official Nikon US web site that this image appeared. 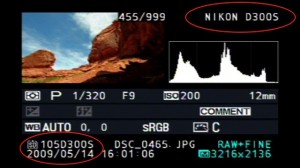 Supposedly to describe seemingly independent techniques, the article used (this has been changed now) what appeared to be screen copies of the LCD back screen of the Nikon D300s which is still unannounced. Many people expect that under this name (or under the name of Nikon D400) this will be the first camera from Nikon to sport dual Flash cards slots (Compact Flash and SD/SDHC) as was expected from the Nikon D700 body which shows the possibility. It should be a nice replacement for the successful Nikon D300.

Notice the large display. It looks like a 16:9 wide LCD screen. It would be quite nice to ensure that the picture is well preserved while displaying histograms alongside.