Iran is a country were AIDS is as present as anywhere else, but probably less officially recognized. About 85% of Afghanistan opium production is trafficked through Iran to Turkey and Eastern Europe, but leaves its trace on Iran, too. Persopolis, the only NGO of its kind in Iran, provides food and clothing and distributes clean hypodermic needles to prevent the spread of HIV AIDS. A single needle can be shared by as many as 10-15 addicts where many are HIV Positive. 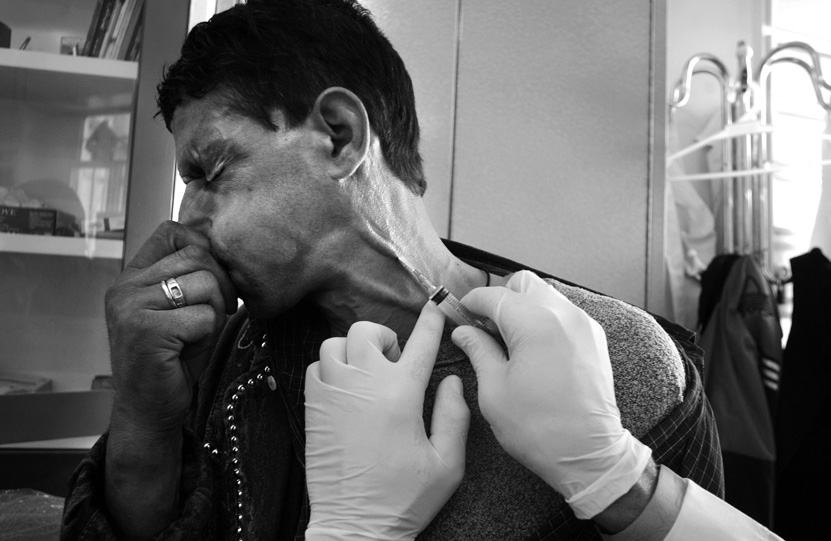 A medical technician with Persopolis takes blood samples for AIDS testing on former convicts, homeless and drug addicts on May 13, 2004, in Tehran, Iran. The man is blowing his nose to inflate his veins, in order to assist in the process of drawing blood.

Blood samples are tested for HIV and drug users are educated about the danger of needle sharing and AIDS as a killer disease. Currently the lab is running on private donations while they apply for governmental support.

Ramin Talaie is an Iran-born photographer based in New York City. He holds a master’s degree in international studies from Adelphi University, has covered the war in Iraq, the fall of Aristide in Haiti, polio in India, Maoists conflict in Nepal and Iranian elections and politics.

← Batch-resize your photos
Water splash: The easy way to a great photo →