New NEX firmware for the experts 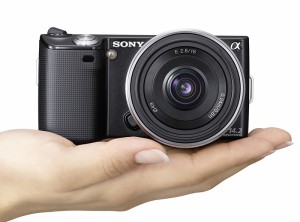 Sony revealed that the cameras from the NEX range will be totally transformed for the photographers who believe that they are experts. To start with, two keys will become programmable:

Then, during video capture, it will become possible to change the aperture. This was a feature relatively easy to add and requested by many (some were very vocal about it).

Beware: You will have to wait 3 or 4 weeks to be able to download this v3 version. But I’m sure that the users of the NEX-3 or NEX-5 will be patient, since some people feared that these features would only arrive in a future NEX-7 (not disclosed at the Photokina) and they come to the existing models.

On top of this, the Alpha SAM or SSM lenses (equipped with an AF motor that the NEX bodies do not have) will become fully usable on the NEX via an adapter ring which will transmit the needed AF electronic data.

Finally, we learn that Sony is preparing 4 lenses for NEX, but they are short on details (I even feel cheated on this):

We’ll talk about them later when we have something to discuss. For the time being, let’s appreciate the neat improvements that will come in a few days with this NEX firmware v3.