Sony presents its future A77 or A7xx

Sony chose the just-opened Photokina fair of Köln (Germany) to tell us much more about its future activities in the Alpha line of DSLR photo cameras. the main part, of course, concerns the future replacement of the Alpha 700.

We learned a few key points:

From its launch the A77 (let’s call it like that for now) will be available with a new trans-standard lens ready to satisfy a demanding customer, a new long prime tele-lens (certainly the 500mm f/4 G SSM we are waiting for in the G range, whose prototype is visible at the Photokina).

Clearly, Sony pushes forward in the semi-transparent mirror architecture. It is a major question mark for the highest end of the camera range, too. What about the Full Frame cameras (the followers to the A850 and A900)? it is quite probable that Sony will wait until they know the sales level of the lower-end cameras. If the A33, A55 and A77 sell strongly, it will allow Sony to extend its range toward the higher levels, but these cameras may feel a bit alone for some time. It is a good thing that they will not feel immediately outmoded… 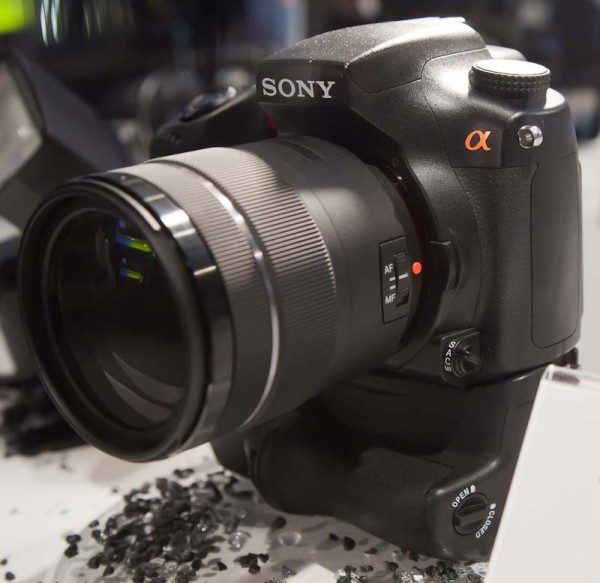 E-mount system cameras: NEX-5/NEX-3
The growing range of E-mount system cameras, lenses and accessories is on display at Photokina. The compact, beautifully styled NEX-5/NEX-3 feature an APS-C size sensor, allowing photographers to capture DSLR-quality stills and video with the creative freedom of interchangeable lenses. On show are prototypes of seven new E-mount lenses that will be available during 2011 and 2012.

Available from mid-October, a firmware update adds fresh functionality to the NEX-5/NEX-3. Autofocus operation is now supported when using A-mount SAM and SSM lenses with the optional LA-EA1 Mount Adaptor. There’s also a new custom function that allows assignment to buttons of frequently-used functions, plus a new function to record movies with setup aperture.