One of the most expected SLR photo camera of 2011 will certainly be the Nikon D400. I have to admit that the name is not official yet, and is only the product of a reasonable speculation, but the successor to the Nikon D300s could easily hold this name. The D300s is currently the Nikon flagship for the APS-C (DX) size digital sensor. It is a very robust camera (a little heavy, but definitely reassuring) with solid photo features and a rather flexible video capture capacity. 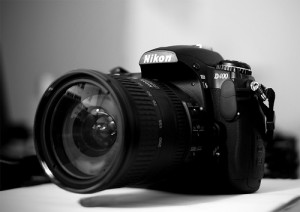 However, Nikon is now ready to launch its replacement (the Nikon D300s was launched in July 2009). So, it is useful to sum up what should be included in this camera when it is revealed to all of us.

The most obvious improvement should be a new sensor, quite certainly coming again from the Sony manufacturing plants. It should be the same as will be used by Sony on the upcoming Alpha 77 (or A77). The rumours has it that Nikon should hit 24 mega-pixels. I am not sure of this, for lack of clear signals from reliable sources. However, the sensor will show a sheer improvement in sensitivity (ISO ratings) and its image quality will be brought to very high levels by Nikon-designed software. The sensor will also provide good video capture (1080p HD at up to 30 fps, possibly a little more) with continuous autofocus (based on contrast detection) during the video shooting.

Some people have been asking if Nikon would be using the semi-transparent mirror of Sony in front of the sensor, and this will not happen. Nikon will only introduce Pellix-like mirrors on a specific camera line which will only appear in the second half of 2011. this is not ready for SLR cameras (it may even be a very long time before Nikon goes into this direction which is not really optimal for expert photographers).

Continuous shooting of the Nikon D400 will not be increased significantly over the existing D300s (already very good) and 7 or 8 fps will be on the characteristics list. However, if the Auto focus will not change (51-point AF & 5 cross-type zones), the light/exposure metering could see the arrival of an improved version of the already excellent 1005-pixel 3D Color Matrix Metering II.

This looks nice (even if not really a jump forward for Nikon), but the availability date for the Nikon D400 is unclear. My sources tell that this could still be in the second quarter of 2011, but probably even very late then (May? June?). Obviously, there is no price information available, but this D400 camera should be fighting hard to drive prices down in a segment which is ready to drop down to the $1000/1000€ mark. I would expect an SRP under 1500€, possibly around 1350€, with a street price coming down quickly to 1200€.