Here they are! The new Sony have been officially announced. The (updated) feature lists are very near to what was leaked up to now:

Important notice: The comparison table (with the competing Canon and Nikon products) has been updated. 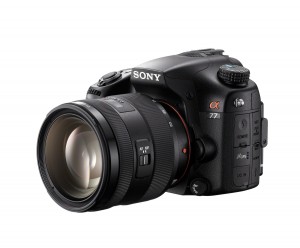 This announcement is coupled with the launch of a new zoom lens for expert customers: The Sony DT 16-50mm F2.8 SSM will be the natural complement to these new SLR cameras (they will be sold in kit together).

Prices are damn-good for the A65 quite-nice for the A77:

But, those of us who are impatient will learn a lesson (as expected): Nothing will be available before October 2011.

Sony’s latest refinements to its Translucent Mirror Technology make these new cameras the fastest, most responsive interchangeable lens cameras in their class, as well as set new performance benchmarks that even professional DSLRs have yet to achieve. The α77 and α65 both feature a newly developed Exmor™ APS HD CMOS sensor with 24.3 effective megapixel resolution, as well as the world’s first XGA OLED Tru-Finder™ viewfinder. The sensor teams with the next generation of Sony’s BIONZ® image processing engine to handle huge amounts of high speed data from the camera sensor, enabling unprecedented response times and flawless image quality with ultra-low noise when shooting still images or Full HD video.

“We feel that these cameras are not only a significant evolution of our breakthrough Translucent Mirror Technology,” said Mike Kahn, director of the alpha camera business group for Sony Electronics. “They’re also a revolution in terms of redefining how this unique technology can be put to use by enthusiasts.”
The much anticipated successor to Sony’s acclaimed α700 DSLR, the α77 boasts the world’s fastest continuous autofocus (AF) shooting performance (among DSLRs in Aug 2011), capturing a burst of full resolution, 24 megapixel images at 12 frames per second with full-time phase-detection AF. The α65 achieves a similarly impressive 10fps shooting speed.

Unprecedented image quality and creative options
A broad sensitivity range of ISO 100-16000 expands (α77 only) down to ISO 50. At the highest sensitivities, both cameras can freeze fast action or capture atmospheric low-noise shots without flash. Low ISO settings are ideal when used with a long exposure to create expressive shots, such as splashing water.

Both cameras showcase a remarkably crisp OLED Tru-Finder™ viewfinder, the world’s first of its kind. With a 2359k dot (XGA) resolution, this precision electronic viewfinder offers a bright, highly detailed, high contrast image with 100 percent frame coverage and a wide field of view comparable to the most advanced class optical viewfinders.

However, unlike optical viewfinders, users have expansive customization capabilities through the XGA OLED Tru-Finder™ viewfinder and can preview the effects of adjusting exposure, white balance and other settings in real-time. Photographers can also make fine focus adjustments via a zoomed-in portion of the image.

The Smart Teleconverter displays an enlarged central portion of the image sensor, allowing compositions to be displayed clearly on the OLED viewfinder and captured as 12 megapixel images with a digital zoom factor of 1.4x or 2x.

Revised ergonomics on both cameras include a comfortably contoured new grip design and tactile new button layout for ‘eyes off’ operation while viewing via the high-resolution XGA OLED Tru-Finder™ viewfinder.

Pricing and Availability
The new α77 Translucent Mirror interchangeable lens camera will be available in a kit with the new SAL1650 f2.8 lens for about $2000, and offered as body-only for about $1400. The SAL1650 lens will also be sold separately for about $700.

The new VG-C77AM vertical grip, designed for the α77 camera, will be available in October for about $300.

The new α65 Translucent Mirror interchangeable lens camera will be available in a kit with a standard 18-55mm lens (SAL1855) for about $1000, and offered as body-only for about $900.
Both the α77 and α65 cameras kits and the new SAL1650 lens will be available this October at Sony retail stores (www.store.sony.com) as well as other authorized retailers throughout the Sony dealer network.