Olympus: Back to the future

If Olympus is obviously in dire financial straits, the teams keep working on t preserve the photo business despite the risks looming high over the company. The latest rumor: Olympus would be preparing a mirror-less photo camera based upon a micro 4/3 digital sensor, with a very tough architecture designed to lift it over the crowd of competition.

It is now nearly certain that this camera will be named OM-D (to draw from the excellent fame of the analog SLR cameras of the 80’s) or OM-Digital and this was publicly confirmed by the publication of a full-page ad in Amateur Photographer magazine (under the big title of “OH MY GOODNESS!”) and it would be the announcement that Olympus people have long been touting in the tune of “here comes the Pro Pen!” to give a big cousin to the PEN hybrid camera of the same brand.

Furthermore, Olympus has widely suggested that the camera would be shown to the press on February 8th (very soon) and could be available in March 2012.

Up to this point, the information is nearly certain but there are also rumors that require confirmation.

Let’s start with the pictures of the camera where we are told that they are an OM-D mock-up from Olympus: Several web sites tried to take advantage of the situation by showing us nice 3D renderings built from the available (lack of) information (Tecnofotografia and Livedoor). But it is almost certain that none of those is coming from Olympus 3D files. We only have very partial close-ups (probably distributed by Olympus itself through 43rumors in order to keep the buzz up).

However, thanks to a post from Wells Fargo Advisors, we are nearly sure of some key items: 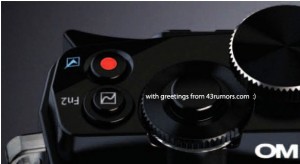 After that, we are entering the realm of more or less wild speculations.

So, if some of these will certainly be proven more rumors and wishes than reality (and I would think the combination would look very good even at the very high price shown above), I keep some skepticism. Is it a good idea to invest our hard-earned money in products from a company whose financial future is so uncertain? However, we must praise Olympus for working hard to draw the attention to cameras which could be able to defend the brand future. Long live the OM-1 and -maybe- the OM-D.