by Yves Roumazeilles on February 8, 2012

Don’t let the photo mislead you, this is not a good old APS-C digital SLR camera. On the contrary, this is a surprising little camera taking its inspiration from many books and many different worlds.

There are only two flies in the ointment: Will the financial wealth of Olympus cast a dark shadow on the camera? And won’t the 1100€ price tag (for the EM5 model shown) be too high?

I know that photo caemras seem to be always more expensive, but a little gem like this one will be leaving a dark stain on the checkbook stub and the credit card invoice slip… 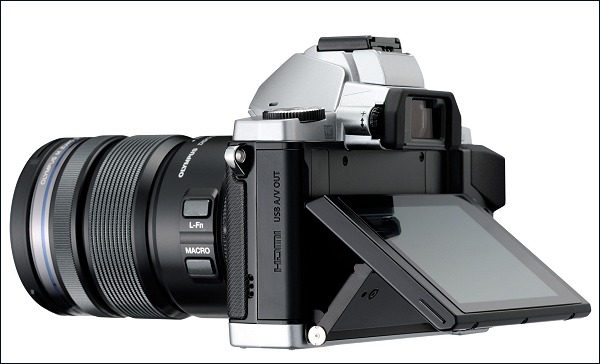 Olympus Imaging has today launched the much anticipated new OM-D (OM Digital Compact System Camera) series, with the announcement of its inaugural E-M5 model. Featuring an integrated 1.44 megapixel electronic viewfinder and 16 megapixel LiveMOS image sensor, it is the world’s fastest auto-focusing camera and is equipped with the world’s first five-axis image stabiliser integrated into its weather-proof alloy body.

The OM-D series heralds a new technological epoch in interchangeable lens digital cameras, as conventional digital SLR camera designs come to an evolutionary end in user experience and portability. With its high-resolution electronic viewfinder (EVF) and real-time digital interface, the Olympus E-M5 immerses the photographer fully into the creative process through a genuine WYSIWYG experience. Exposure, colour and filter effects are seen live, not after the picture has been taken.

Olympus has also developed world’s first five-axis image stabilisation (IS) system. In addition to the standard two-axis camera pitch/yaw movement detection and compensation, the system in the E-M5 is also capable of detecting vertical and horizontal translational movement, and roll along the lens axis. IS compensation is effective up to a maximum of -5 EV. With a newly designed mechanism for shifting the sensor, the effects of IS can be seen live through the electronic viewfinder in both still shooting and recording video.

For maximum convenience, an eye-level sensor automatically switches Live View between the rear OLED touch-sensitive screen and the EVF when the camera is lifted to eye-level for shooting. This new tilting 3″ OLED capacitative touch-screen enables tap-shooting with focus point selection, and image playback control.

Designed as a creative tool that you can take with you everywhere, even in inclement conditions, the E-M5 is both splash and dustproof**, and features a light yet robust magnesium alloy chassis.

HLD-6 kit comprise of HLD-G and HLD-P. It provides for both vertical and horizontal camera holding, or just vertical if the top half (HLD-G) is used without the battery pack grip (HLD-P). A total of two BLN-1 batteries – one in the camera body, one in the grip can be used together. Features weather-sealing.

The new FL-600R flash strobe has a maximum guide number of 50 (ISO200) and can work either as a wireless commander or slave strobe with both E-M5 and PEN models. The flash head tilts down 7 degrees and up 90 degrees, with 180 degrees rotation on either side. It uses 4 AA batteries for fast recycling, has a built-in wide diffuser panel for a 16mm equivalent coverage, and a small pull-out reflector plate to create catch-lights in portraits. For video recording, it has a built-in 1W LED.

As the FL-LM2 flash provided as standard with the OLYMPUS OM-D incorporates the wireless flash control function, it can also control the UFL-2 Underwater Flash.

The E-M5’s integrated electronic viewfinder with 1.44 megapixel resolution not only provides an extremely clear view courtesy of Olympus high-performance all-aspherical viewfinder optics, it provides real-time feedback of exposure and settings with a WYSIWYG experience in picture making and movie recording. Elements of the new Creative Control interface can be superimposed onto the live picture to assist intuitive interactivity. An example shown below is the new highlight and shadow curve adjustment feature.

Most contemporary IS systems whether integrated into camera body or lens-based are only able to detect movements in a 2-axis orientation – pitch and yaw. A world’s first 5-axis system has been developed for the OM-D series that provides comprehensive stabilisation for almost all forms of camera shake possible including horizontal and vertical translational movements, as well as roll movement around the lens axis. Overall IS performance is significantly better than two or three axis IS systems. This new stabilisation system is capable of up to -5 EV of image stabilisation. Handheld macro photography is a big beneficiary of this new IS system, as would long-lens or low-light shooting situations.

This new MSC (Movie & Still Compatible) IS unit incorporates Olympus’ pioneering SSWF (Supersonic Wave Filter) dust reduction system for dust-free photography. A new IS drive mechanism enables the effect of stabilisation to be viewed in real-time through the EVF. Like all Olympus PEN and DSLR cameras with built-in IS, image stabilisation can even be extended to OM legacy lenses that are non-electronically coupled, via manual focal length input.

Contrary to popular belief, conventional phase detection (PD) AF systems found in the majority of available DSLRs are actually technology limited in low-light focusing situations and hence provide much lower AF performance even if a large aperture lens (e.g., f1.4) is used, when compared to contrast (CD) AF type systems. Most conventional phase detection systems can only make use of light flux equivalent to f5.6 or 10 degrees by default, even when a taking lens of larger than f5.6 aperture is used. This weakness is inherent in the actual working principle of most PD AF systems in use today as shown in the diagram below.

Contrast Detect AF systems on the other hand benefit make full use of the corresponding increase in the amount of light with larger aperture lenses for better AF accuracy in low-light photographic situations.

The E-M5 body uses a comprehensive weather-proofing system. When used with the M.Zuiko Digital 12-50mm lens which is also dust and splashproof, the camera system is fully sealed against the elements. The accessory FL-LM2 flash, as well as the HLD-6 battery grip kit are also weather-sealed.

For maximum chassis strength, a special high-precision casting process akin to injection moulding is used to create the rugged magnesium alloy chassis that protects the sophisticated electronics and mechanics.