Posted in Technology, ·Others

by Yves Roumazeilles on September 7, 2009 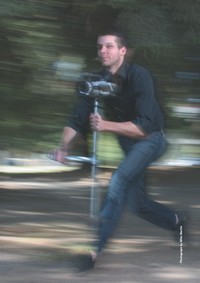 Those interested in video probably already know it, pros often use a stabilization system essentially made out of a heavy suspended mass to limit the camera moves when the operator uses it while walking or running. Unfortunately, as many understood it quickly, those devices are awfully expensive.

For us, SLR camera lovers, today attracted to video shooting because the most recent SLR cameras include video capture, this understanding is painfully true. But I found an article detailling how to build such a stabilizer. The best of it: a low price, a cheap price, not free but only 14US$. You’ll have to do it yourself.