Who said landscapes and graphic design could not meet in a photograph? Not Misha de Ridder. 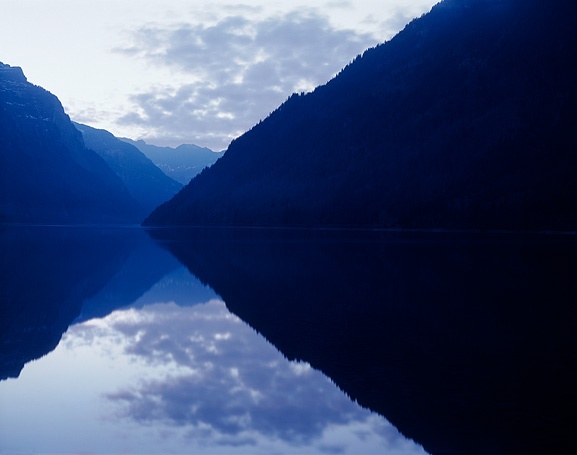 The photo is called Bergwald and is from the series Abendsonne. It has been on show in 2009 at Juliètte Jongma Gallery in Amsterdam, The Netherlands.

Sometimes natural phenomena can become so estranged and mysterious, that we are inclined to describe them as unreal realities. It might be the extraordinary shape of a tree, a mountain, a shadow, a cloud or the mirroring reflection of nature in a lake, but it is foremost the unfamiliarity of the natural aesthetics of reality.

The series Abendsonne literally refers to such an unfamiliar natural phenomenon, a phenomenon that appears twice a year during the end of the autumn and the beginning of spring for the period of one week in an area in the Swiss Alps. During the winter season a village is permanently covered by the shadow of a high mountain in the west, which eliminates all direct sunlight. A week before darkness falls, the sun appears one more time after it has set every evening. A mysterious phenomenon known as Abendsonne.

The photos are visual repetitions of the area where the ‘Abendsonne’ appears, at a lake, known for it’s flat, almost mirror-like surface, taken under different natural circumstances and presented in different printed scales. This juxtaposition of difference and equality evokes questions about authenticity, originality, reality and the representation of reality within the medium of photography. Unambiguous reference to the unreal reality of the Abendsonne.

The photo Bergwald has been shot with a very long exposure after the sun has just set, so that it looks like it’s light, but actually it’s not.

All Misha de Ridder‘s work is made with a Linhof Technica 4×5″ large format camera.