by Yves Roumazeilles on November 5, 2010 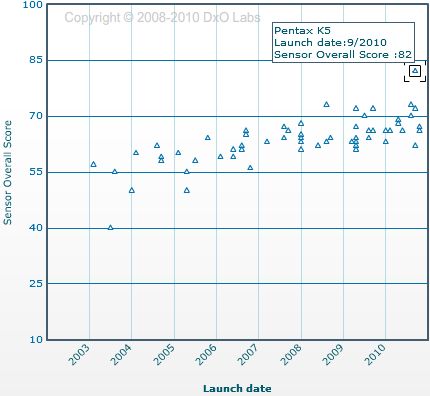 It was not even a full day after I indicated that the Sony Alpha 55 was at the top of the competition since it had the best sensor evaluation ranking among the APS-C camera sensors. Here comes a new update from DxO Labs and the DxOMark ranking is revolutionized.

Not only is the Pentax K5 is at the top, the Pentax K-5 has the best APS-C sensor according to DxOMark, but while the next ones are very similar one to the other (all have 73 points) the Pentax K-reaches the stratospheric score of no less than 82, which nearly puts it in a different category altogether (near the Nikon D3s that has a Full Frame sensor). Impressive! The Pentax K5 leaves the competition far behind in the dust of its lift off.