As you certainly know by now, the Discovery space shuttle is currently flying its last mission, during which it will rendez-vous with the International Space Station (ISS) which has been assembled by several countries in low Earth orbit in the recent years.

To honor it, I have the pleasure to present a few stunning pictures demonstrating clearly what it is possible to do with a photo camera when passion is meeting the availability of such an impressive model (and, here, the meaning of “availability” has to be taken with quite some flexibility).

First, Paolo Nespoli, astronaut in the space station shot the arrival of the shuttle. Nice depth of field (down to Peru 360 km below) but also notice the shadow cast by the station itself. (Should this be classified as bad lighting or as the inclusion of a second model in the picture?) 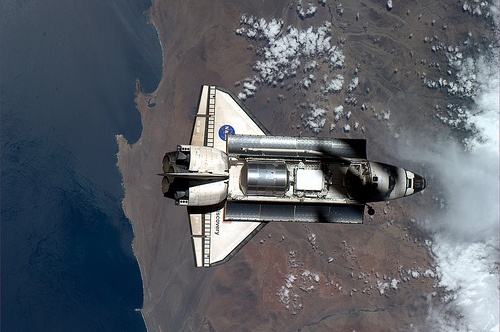 But Paolo Nespoli was perfectly located: A window, a nice lighting (great direct sun with no cloud cover), a nice background, the model cooperating politely under direct and precise commands. But, exactly at the opposite end of the easiness spectrum, if you’re down here on Earth, you can see the space station with you own eyes (and maybe recognize more or less its shape with good binoculars). So, why not try and shot it? 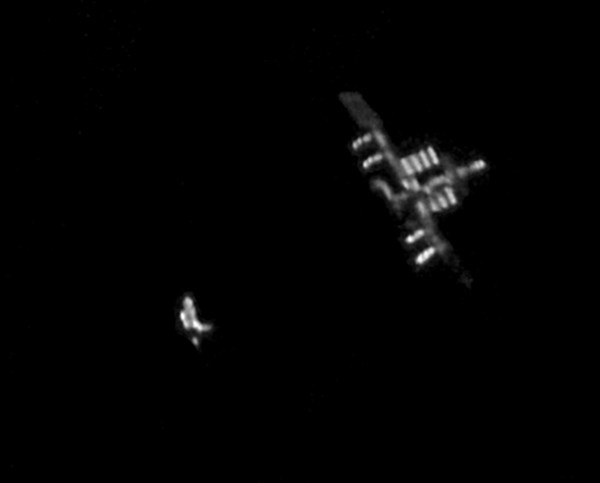 This is a rather exceptional snapshot taken by Rob Bullen on Saturday night with a relatively small telescope (22 cm or 8,5″). Even worse or even better, instead of using a fully automated guidance/pointing setup, this craftsman of an astro photographer aligned his telescope and his photo camera by hand. I’m stunned!

But this is not all. If you want even more, you must go and see the great photo sequence of Thierry Legault, French engineer living near Paris who assembled 900 photos into a little accelerated video sequence where we can clearly see the International Space Station and the approaching shuttle.

All those photographers aiming their cameras at the same model nearly exactly at the same time!

Kudos to all of them! And my warm thanks to Xtian who put me on the track of the articles of Phil Plait in Discover Magazine.