According to an information received by SonyAlphaRumors, the much-awaited Sony Alpha 77 or Sony SLT-A77 (the name has not been clearly confirmed yet) is now really about to arrive. After several non-official delays, July 7, 2011 (or 2011/7/7) has been chosen. OK, the people from Sony Photo are guys nearly prone to pranks, who are borrowing the marketing tactics of their colleagues of Sony Music or Sony Pictures. 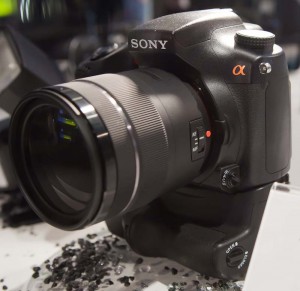 But there is something much more important: The price would be like the sound of thunder in a bright blue sky since we are told about $1077 (or $1099) in kit with a zoom (probably the current Sony DT 18-55mm f/3.5-5.6 SAM, but without any official confirmation, of course). The price will also be the stepping stone of joyful comments which are expected to accompany the marketing buzz of the camera launch. But, more critically, it must be frightening competition. At $1500/1500€, it would have been running strong in the race (between the Nikon D7000 and the Canon EOS 7D). But under 1100€ with a zoom lens, it is rushing ahead and goes neatly below the Nikon price and will go and grab the prize we thought reserved to amateurs rather than experts and pros.

We’ll wait for a confirmation, but I seem to hear the rumbling noise from salespeople meeting rooms from Canon, Nikon, Pentax: They will have to re-organize the catalogs, cut prices to limit the consequences. It may be seen in the future as the same kind of historical event as the launch of the Canon EOS 300D which, in 2003, was the first digital SLR camera going under $1000/1000€ in one sweep.

And of course, this comes with features which would attract attention without this kind of surprise price:

← Make sure your photo camera is stolen
SD1: Sigma wants to fail →