I nearly missed this information bit which had been right under my eyes for quite some time, but here are the launch prices of the Sony A77 in September 2011.

Suggested prices (to be reduced in the actual shops).

As a matter of fact, the information is present at the bottom of page 36 in Réponses Photo, second photo magazine in France which is organizing an amateur photo competition with a large quantity of prizes in real photo gear from all major brands (Canon, Nikon, Pentax, Sony). Curiously, they did not make precise announcements of the Sony-based prizes, but they give a good indication: 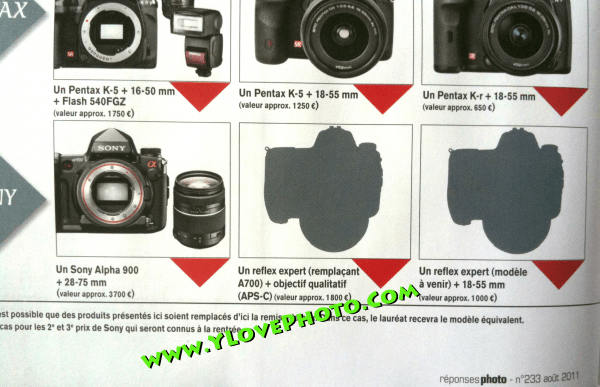 From this, knowing that the Alpha 700 will come with a small brother under the name of Sony A65 and tying to be normally able in the art of divination, it becomes possible to deduce the price of these cameras.

since the details of the photo competition will only be known in the next special edition (n° 12), it is quite possible to understand that the indicated availability date (“the 2nd and 3rd prizes from Sony […] will be known in Fall”) confirms the possibility of an official launch during the first half of September 2011 (the news people of Réponses Photo quite certainly already have the cameras under test and are invited to the official launch ceremony to be organized by Sony France).