Here are three photos I shot last Sunday during a visit to the Lake Der-Chantecoq.

If you want to only watch the photographs, you can merely ask for a large format print on RedBubble (or a simple card).

But I think that the story of these three photos is a good example of what I (sometimes) succeed in doing in photography. Let me tell you this story.

The Lake Der-Chantecoq is located in France between Troyes and Saint Dizier, at the gates of the Champagne vineyards. It is a man-made volume created to be hold the high waters of the River Marne to reduce the risk of flooding Paris. Several villages have be drowned in its waters when it was built between 1967 and 1974. Water fauna and migratory birds adopted its 48 km² (the largest artificial lake in France) in their long journeys and its being classified Réserve Nationale de Chasse et de Faune Sauvage provides good protection. So, this became a common meeting point for amateur ornithologists (with or without a photo camera).

Tip: If the specialists go there, follow in their steps.

I wanted to go there for a long time, but only a little whim (“why not go and watch sunrise there? I don’t have anything better planned for the day”) in order to have me moving. Let’s remember that early and late hours provide these lights often named the “golden hour” for they offer richer lights, quieter moments (less tourists). You may have to make some little effort, though (African safaris are not the only time to wake up early).

But, I have to admit that this was a little over my usual limit: Up at 3:30 to drive from Paris in time for sunrise…

I should have been checking the Weather Channel before leaving: Heavy fog on the last 60km.

Tip: Check the weather before.

What could I do when light is lacking and colours are gone? (Usually, colours are easier for me and my eye) Let’s choose something completely different: Monochrome. If I had checked the weather, I may have hesitated to wake up early and I would only had had the grey afternoon of that same day.

Tip: Don’t check the weather and use whatever happens to be at hand.

This is no random chance if those three pictures are framed vertically. Many a photo would look better (would look more “pro”) once in a frame favoring their height. Quite a large number of my best photos are vertical (I have to fill the frame adequately, but it’s often more dynamic).

Tip: Always check if a vertical frame “would be better”. 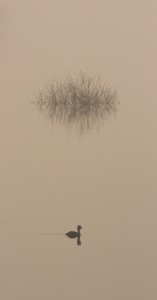 Great Crested Grebe in the sunrise

Advice is made to be forgotten, but for composition millenia-old rules are to stay. One of them, “the rule of thirds”, requires to cut the image in three identical parts, locating the subject(s) adequately in the frame.

In the picture here on the right, I think I had a little success. The grebe is in the lower third, the bush in the upper third. Let’s not get technical though: I introduced a slight imbalance to compensate for the relative masses of both subjects.

In the case of the backlit grebe, composition is using 1/3 plus 2/3. In the upper part, there could be another object (like the bush in the previous photo), but I chose to leave this space empty in order to let the sun fill it. The rule o fthirds is here… with a twist. 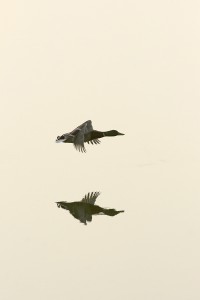 for the duck picture, I wanted to take advantage of the mirror effect in the lake water. I could have built a perfectly symetric image composition, but “it didn’t fly”. So, I reframed it slightly to give a little more space over both silhouettes and let the duck take off.

Here is a centered composition. Out of center.

Tip: Choose your composition before pressing the shutter release.

Once the photo shot, it is possible to reach the image development stage (like for a chemical silver picture, but with computer-based techniques). This is not the easier part, but I like it and the computer is forginving: You don’t have to pay your errors and trials with expensive chemical baths and photo paper. 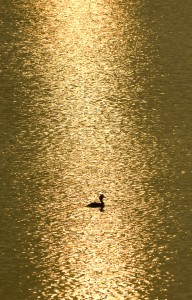 Here, the sky is the limit. The first thing to do, maybe the easiest, is to reframe the image. The grebe on the right was not framed like that on the original image. As a matter of fact, the enormous light contrasts made the autofocus a bit imprecise. So, I chose to focus on the bird with the most sensitive AF sensor (center one for most SLR cameras) and not to reframe immediately but only later. I also used the computer to perfect centering of the glimmer (the bird was always moving around, diving down, and I did not want to risk missing the right moment; I kept some finishing steps for a later stage).

But this image also had its inherent difficulties. It’s not too visible in the Internet-sized picture, but it was critical to maintain a perfect quality on large prints and posters; Two dangers loomed in the original file:

This is one situation where I drop the JPEG file in favor of its Raw counter-part. Thanks to Adobe Camera Raw for its ability to simultaneously work on optical defects like this aura (with a lovely choice of settings), image accentuation and colour balance (it is critical even if the photo seems to be made of only five impressionnist coloured oils).

Raw was also the only way to keep the soft pink colour of the other grebe.

Even if it was simpler for the flying duck, it was worth a small correction using Photoshop curves to bring colours back.

In the end, both monochrome images received intensive care to clean up little details: Each water reflection was checked and evaluated individually and in the context of the overall photograph. Some were promtply removed. Many have simply been tweaked a bit. For example, the future owners of a large print of the duck’s flight will notice a few water droplets flying around the bird and their reflection on the lake surface.

But I worked only on these three images. 80 shutter clicks, sorting done by a fanatic. I don’t want to spend my energy on images that would not be worth it. I slowly teached myself that it’s no use trying to control images in the field and that I must drop anything less than perfect. Even with this, all my images are far from perfection and those who are obviously not will never leave Adobe Bridge.

Tip: Remove anything less than perfect. Only keep the best.

It’s easier if you had a clear idea of the photo you wanted to get while releasing the shutter. Your pictures are linked by this common initial aim.

Tip: Decide what photo you want. Do not just press the shutter release.

Once you have all aces in your game, luck is welcome too. On each of these images, there is a bit of luck.

Tip: Have luck. After all this, you earned it.

Now, if you were not disappointed by the detailled explanation, you may still buy a large format print on RedBubble.