Backup for the photographer – part 2

We have been looking into the most obvious option for the photographer willing to backup its large amount of data: The local storage on an external hard drive. Nearly everyone of us at least tried to use this approach. But it is worth trying to understand that there are other very good options that I want to propose here.

Let’s start with other local storage (we’ll keep online storage for later installments of this series).

Many people have been using DVDs (previously CD-Rs) to make copies of all their images.

This may look good: copying a bunch of files to a DVD-R is a simple matter and once done, it is pretty difficult to delete the files. You setup yourself for a little routine, and you keep a stack of plastic discs holding all your images in as many copies as you want.

While we are repeated that CD life times are reaching a century (DVD life times are only a little shorter), this is only partially true. Let’s see some interesting details:

Do not use any optical storage for more than temporary storage. A few years are OK, if you make sure that the discs are permanently stored inside a cupboard in an air-conditioned room. Not good for serious backup.

More details about this issue:

CD-R/DVD-R reliability even with bibliographic information, if you don’t believe me. 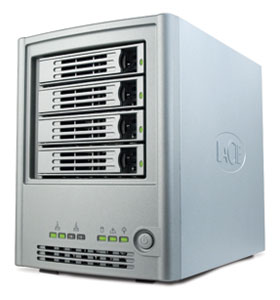 Digital granddad: Don’t even look at this.

Expert: It is overkill and not enough for backup.

Pro: This may be an addition to your backup strategy. A backup is useful, but using a RAID unit may protect you against hardware failures without needing a long restore. Just remember that once the RAID unit is reduced by a first failure, it cannot protect against others; Go and buy a replacement disc. You may wait an hour or two. Don’t push your chance by waiting until next week…

RAID stands for Redundant Array of Inexpensive Disks. It describes a way to associate several disc drives in a way that protects them against the failure of one of them. Suppose that a single disc drive suddenly fails, you loose the data right now. In a RAID, discs support each other and (in the right configuration) a single disc failure will be signaled by a message or a blinking light, but the RAID unit will still operate as a fully normal disc.

It is worth mentioning because it protects very efficiently against disc drive hardware failures. Several computer motherboard include the feature allowing to build such unit by merely connecting 3 to 5 normal discs and using a setup wizard. After a failure, you finish your work normally, remove the failed drive, replace it with a new one and forget about this bleep of an incident.

One important thing to remember: This is not replacing a backup because even a RAID drive unit will not protect you against the accidental deletion of a file. On the contrary, it will make sure that your accidental deletion is achieved in the safest way.

I can also invite to reading some useful complementary posts:

Digital granddad: You may not want to worry about this. But think about it anyway.

Expert: You may want to use two disc drives and regularly move one of them to your best friend’s home, or you may look at the on-line options.

Pro: You must include a remote storage solution. But even for a quick-and-dirty need, we will show non-local ideas later.

It is now time for you to remember one important thing in terms of disaster management: Do not underestimate the seriousness of the circumstances that will lead to a loss of data. Rather common reasons to loose your data are fire and theft. If your backup hard drive is in the same room/house as your computer and a fire starts, not only will you loose your house and your computer, but your backup is gone as well. If a burglar enters your flat and leaves with computer hardware, you can be sure that he will take both the computer and the external drive sitting at its side.

If you are using Windows Vista or Windows 7, you may have an urgent need to get a free software utility to ensure fast file copy.

Question to the Pro: Do you remember what happened to this photo colleague who lost all of his archives in an office fire a few years ago?

Any local storage is unsafe from this point of view. No hard disk, no DVD would be safe from the accidental fire. You still can ship your backup drive to your mom, but this becomes really cumbersome. In the next installment, we will look at backup solutions that include a storage located at some significant distance.

4 comments for “Backup for the photographer – part 2”