Here comes an interesting remark from AmateurPhotographeur which lead us to read gain the photographs already available of the future 500mm f/4 APO G SSM from Sony. 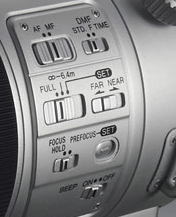 This pro-tele-prime lens announced a year ago by Sony includes a small DMF button whose meaning should be Direct Manual Focus. The use of this button would be to easily move from a “normal” AF mode to a “x15 zoom” mode allowing easier fine focusing.

This feature has nearly no use in a prime lens which certainly contains no optical element to support such a feature. AP concludes that the only explanation is that this is a control for an SLR body feature associated to the electronic viewfinder of future cameras from Sony. Good reasoning…

The consequence:If a prime lens whose price (a few thousand Euros, maybe 10000€/$10.000) puts is firmly in the pro range contains such a feature, the electronic viewfinder is coming to the next pro cameras from Sony. The conclusion is that the Sony Alpha 77 (or Alpha 750) which will follow in the steps of the Sony Alpha 700 will be equipped with an Electronic Viewfinder (EVF) and a semi-transparent mirror like the Alpha 33 and Alpha 55, that are clearly in the entry-level part of the Sony camera offering.

It’s still a bit weird for a button already appearing on the 500mm f/4 mock-ups presented a little more than a year ago. But the indication is quite parallel to the success observed by the semi-transparent mirror system with an electronic viewfinder of the SLT-A33 and SLT-A55 (big sales everywhere in the world in 2010, starting with the Japanese market).