If you want to see a company suffering the worst pain at the worst possible moment, just look at Sony. In 2009, they repeated us that they would not add video to the DSLR photo cameras until it would be perfectly right and the half-baked solutions from Canon and Nikon where indirect justifications to this position; In 2010, the launch of the Alpha 33 (SLT-A33) and Alpha 55 (SLT-A55) was a major technological event with the appearance of a semi-transparent mirror which would solve all problems. And I have to admit that the technical innovation was like a shattering sound in the sky in front of a public whose expectations are usually very high. 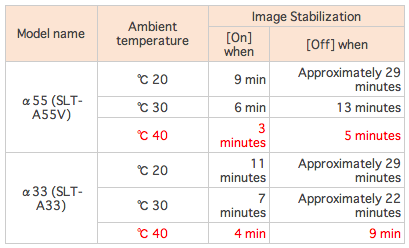 But there was a fly in the ointment. Only a few weeks after the official launch, we learned that the digital sensor is overheating. We know that the digital photo-video sensors produce heat whenever they are used. The design of sensors for video (and thus used more or less continuously) must take that into account to avoid heat production at all costs. The design of the cameras must take into account the need to move any heat left right out of the sensor area (possibly out of the camera).

Sony definitely missed one of these, indeed. The SLT-A33 and SLT-A55 are suffering from over-heating to the point that, when reaching a certain temperature, the camera switches itself off (It shuts the sensor down). As can be seen in the table here on the side, in the worst case (when it’s hot outside, 40°C, and that image stabilization is enabled), this is going to happen fast, real fast: 3 or 4 minutes only. Probably nearly everybody will admit that this is incompatible with the normal use of video capture in a normal way.

So, no video grabbing during Summer. More or less.

If you thought that this was bad enough, there is a hint to the possible addition, unconfirmed by Sony right now, of another limitation (maybe, within a longer time frame) respective to the use of the LiveView mode (which is only a low definition video mode).

The solutions? Let’s try to think them out:

While waiting for it, for those asking if they should buy a Sony SLT-A55 and thinking that they need the video capture, I say: Wait. For those who are in a hurry, I will not less than they must forget about video on the Alpha 33 and Alpha 55 for now. Video is nearly excluded in these cameras for the time being. The small sound you can hear is those competitors (Starting with Nikon and Canon) exhaling loudly (These cameras had given them cold sweats and they now feel that this could buy them some more time to react).