Will the Electronic Viewfinder (EVF) save the photo world?

by Yves Roumazeilles on September 8, 2011

With the first expert photo cameras from Sony equipped with electronic viewfinders, the question is more and more often asked whether this is a technological opportunity that the old photo pricks prefer to ignore or an approximate solution aimed only at low-demand customers. As a matter of fact, truth lies somewhere in between those two extremes and we will try to see why.

What is an EVF?

Be ready to see this term used more and more, even for SLR cameras. Many a compact point-and-shoot photo camera already is equipped with an EVF, but it is most common in video cameras (and it has been for many years already). In the viewfinder, instead of looking at an image coming from a more or less complex optical system, your eye is pointed at a small LCD screen (or TFT, or OLED or whatever similar technology) reproducing the picture recorded by the CMOS imaging sensor of the camera.

After all, this is only what we already know well as the LiveView mode on the back LCD of nearly all the compact photo cameras (and many SLR too). But as a small picture in the viewfinder.

An LCD display + a viewing lens = an EVF.

In some case, you could add a small mirror for space reasons, but this is a minor variation to the original tune.

A Single Lens Reflex (SLR) photo camera is organized around a very mature technology in which a mirror reflects the image through an eyepiece via a pentaprism (or a penta-mirror) as in the drawing on the left.

Of course, as the film (film plane and focal plane shutter) is hidden by the mirror, this one must be drawn up to take the snapshot.

All this is greatly simplified when there is an electronic viewfinder.

The first positive side is mechanical and optical: If you remove the mirror and the pentaprism, the architecture of the camera will be greatly streamlined, lightened and its manufacturing cost will go down. For three different reasons (at least):

Even better, the disappearance of a huge articulated and mobile mechanical system brings several positive effects:

Also, the electronic viewfinder exactly reproduces what the sensor sees. A 100% optical coverage on a viewfinder of fully optical design has always been reserved to the most expensive SLR cameras. But when you get an EVF, 100% coverage is totally natural and effortless. Luxury comes to you in the clothes (and price) of entry level.

Then, having an LCD display brings the additional possibility of adding all the data you can think of. Many brands already experimented with this and brought us some Electronic Viewfinders with features like:

As a matter of fact, there is no other limit than what a computer screen can display: Data, image, etc. It’s only a choice from the designer.

And it’s not even the end of it. The EVF also has a major advantage when light is low: As far as the sensor can see something, it’s only a matter of amplifying light signal (like for the ISO sensitivity selection) to make the picture readable. If the photo is possible (even barely possible), showing it is possible. Think about it! A nikon D3s digital sensor could display what it sees even in the darkest dawn it can manage. Since the digital noise is only a marginal issue on an LCD display (even at 3MP resolution), you can see what the sensor will be able to grab even in a room too dark for comfortable framing with an optical viewfinder.

If you compare it with the lowest-priced optical viewfinders of entry-level SLR cameras, the EVF is an easy winner in those low-light conditions: These simple viewfinders where already unpleasant and dark, the EVF bring a new life to cameras used indoors.

Drawbacks and limitations of the electronic viewfinder

But all is not pink and shiny. EVF have the same problems as most point-and-shoot cameras find on the rear-side LCD displays used for LiveView.

To start with, even if the electronic viewfinder (EVF) is intrinsically better protected against sunlight, it is still very sensitive to bright light issues. If there was only one thing that the EVF-sensor pair does not like, this would be high lights and bright sun (sic!) highlights are easily washed white and overblown. You will find more white flat areas than nice clear zones. The worst comes when you add high contrast to the picture. The EVF has a very small dynamic range (this is not HDR!) and the designer must choose between high-lights and dark areas.

We tend to forget it, but the human eye is amazingly sensitive and adaptable. Behind a prism and a mirror, in the brightest mid-day sun light, it can marvelously adapt to over-exposure situations that totally saturate the purely digital EVF system.

Best (or worse), the eye is extraordinarily able to switch within a few hundredth of seconds from the darkest night to the most violent lighting without even thinking about the marvelous brain processes involved. On the contrary, the EVF system uses a gain correction which will change at any time the apparent brightness to track the actual scene brightness. What is clearly an advantage in a dark room, forces the system to include an auto-adaptation feature which will change the brightness of the EVF several times per second. According to what you point the camera to, the electronic viewfinder will change from lighter to darker display. Not really a problem, but this asks for some tolerance to a process which is not natural to our human eyes. You have to get used to it.

Additionally, but this is all very sensitive to the user (you!), watching a computer screen may be more or less comfortable in the long run. As a matter of fact, if you use the EVF for long hours (this is the case for the professional photographer waiting in front of the Cannes Festival stairs, for the photo safari amateur or for the intensive tourist photographer willing to bring everything on a memory card – don’t laugh, I’m sure you shoot it as much as I do), you may come back with a serious headache. This is certainly not an issue for everybody (and you’re not supposed to keep the camera to your eye if you want to immerse yourself in your subject), but this may become a real limitation to some people. At the strict minimum, you must take very seriously the setting up of the dioptric correction of the eyepiece (much more seriously than on your current camera) to limit the impact to a tolerable level. Unfortunately, the eye seems to get more prone to this issue when the photographers gets older… Our eyes are not equal in front of photo gear. Too bad, but true. 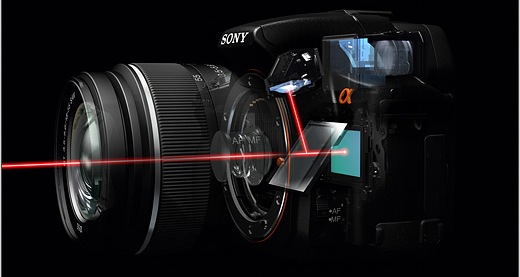 Last but not least, even if the electronic viewfinders improve in time (and Sony has shaken the market with a 2.3-million-pixel EVF in the Sony SLT-A65 and in the Sony SLT-A77 which has raised the bar to a whole new level for all the competition), the fine quality of a focusing screen in a common optical viewfinder stays incomparably better than what the best EVF can display today. Far better! This is the reason why they generally include an additional Zoom feature allowing to better judge focus through enlarging an area (On the opposite, a company like Zacuto proposes an enhanced edge sharpening to make the focus analysis easier or more natural).

If you let your camera focus for you, honestly, you shouldn’t care much about this. If you like to fine-focus your pictures (all the more if you use a USM, SSM or similar lens which allows easy manual focus correction), if you use wide-aperture lenses (which call for a very attentive selection of the focus location or AF area), you will be in a living hell playing with buttons to merely focus while you were used to just looking at the image in your old optical viewfinder. Interestingly, Sony keeping in its technological portfolio the marvelous AcuteMate focusing glass surface (bought from Minolta and still widely considered as the absolute best here), is the first to jump to the next technology.

Sony patented a focusing method not requiring a semi-transparent mirror, where the AF sensors are directly included in the image digital sensor, but this is probably more a way to limit competition options (a little complicated but definitely interesting) than an indication of what lies next. Fuji also uses a very similar solution.

While we talking about AF, we must stop and remind ourselves that the disappearance of the reflex mirror means that focusing is now done from the data directly available on the image sensor. Where the traditional SLR camera focuses just before the exposure, using phase difference sensors (high precision, high speed, and not very complicated), the EVF viewfinder seems to enforce the use of automatic focusing using the measurement of a contrast difference directly on the image (very consuming in terms of processor power, intrinsically less reactive). Sony, once again at the forefront, chose to insert a semi-transparent mirror to keep the fast phase detection sensors. But they are quite alone in this decision – for now.

The electronic viewfinder is no panacea. But it brings good answers to tough questions asked by the old reflex technology, starting with price reduction for the digital photo cameras which is always a major issue for the manufacturers.

The camera owners already used to the optical viewfinder of entry-level cameras will immediately recognize the many advantages and all the more if they are occasional photographers or if they come from the compact point-and-shoot camera world.

Expert users (not even pros) will certainly have more mixed feelings, even if the most advanced electronic viewfinders like the recent Sony ones progressed in great strides. As I read in one of the recent articles about these new photo cameras, Sony brought enormous (not incremental) progress but this is still an electronic viewfinder. Not perfect, but with enough advantages to balance the drawbacks.

Now, you may have to read the post again to choose which ones are the most important for you. But there is a big problem left: We usually choose our photo camera inside a relatively dark shop (perfect, ideal conditions to demonstrate an EVF) and we use it mostly during our Summer holidays (the worst conditions to use an EVF). Some people may be unpleasantly surprised if they do not think twice before choosing a camera.

1 comment for “Will the Electronic Viewfinder (EVF) save the photo world?”